Fact or Fiction? 3 Things You Need to Know About 'Dracula's Castle'

Before every travel destination had a ghost tour and haunted hotels, there was Dracula's Castle.

Irish author Bram Stoker's 1897 Gothic horror novel 'Dracula' popularized the vampire genre of fantasy fiction that today is more popular than ever.
And although the character of the undead Transylvanian Count is fictional, the Romanian national monument known all over the world as 'Dracula's Castle' is real. 14th century Bran Castle is about a hundred miles from Bucharest and has long been considered the 'home' of Dracula - even though the genuine Romanian nobleman that supposedly inspired Dracula has only a weak connection to Bran Castle.
Characters in a novel, historic rulers, and real castles? How's a fan of vampires or Halloween to know what to believe about the world's original 'horror'-themed attraction and travel destination?
Here's some help sorting out what's fact and what's fiction for a trip to Dracula's Castle.

Fictional Count Dracula lives in what Stoker describes as a ruin of a castle in the Carpathian Mountains. Real-life Bran Castle is no ruin. It's a well-preserved medieval stronghold with fairytale turrets, hidden passageways, grand hall, and a stone courtyard.
But it's the only castle in Transylvania that matches Stoker's description of its location: dramatically perched on the rocks 200 feet high above a flowing river gorge through the forest.
Dracula author Bram Stoker never visited Romania. But he did years of research. And the illustration of Dracula's Castle in the first edition looks like the image of Bran Castle that appeared in an earlier book published in London about Transylvania. The illustration does not resemble any other Romanian castle.

Was there a real 'Dracula'?

Since Stoker's novel, the name 'Dracula' keeps readers awake with the lights on at night. But the term in reality is horror-free. 'Dracul' means 'Dragon' and the title originates with a Crusader 'Order of the Dragon' whose knights vowed to protect against the Ottomans.
So there were a number of 'Dracula's, including the Transylvanian-born, real-life prince now connected to the fictional character Dracula. Vlad III / 'Vlad the Impaler' was a 15th century local ruler associated with the Order of the Dragon, so he was also titled 'Vlad Dracul'.
100,000 people or more are said to have died at his hands, many by impaling. However, they were brutal times, and Vlad Dracul was a local hero for fending off Ottoman invaders.
His own castle (now in ruins) wasn't even in Transylvania, but he was imprisoned for a time during local conflicts in… Bran Castle.
Stoker mentions his 'Dracula' fought against the Ottomans and was later betrayed, which dovetail with the history of the real Vlad III Dracul.

If Dracula's name and pieces of his back story were borrowed from a local prince, the vampire myth was borrowed from Transylvanian folklore. 19th century works in English describe Eastern European legends about evil souls coming out at night to cause trouble and feed on the blood of the living to sustain them in immortality.
Stoker would have had access to these legends, as well as reports of local myths coming out in real life with cases of 'sightings', corpses being staked and people being accused of being vampires. Prior to 'Dracula', a couple other works of fiction created the persona of a pale, sophisticated, aristocratic vampire. The popularity of Stoker's novel fueled the rise of the vampire genre as we know it today.

Bottom line: if you're a fan of vampire fiction, we do think Bran Castle qualifies as the 'spiritual home' of the modern vampire legend. 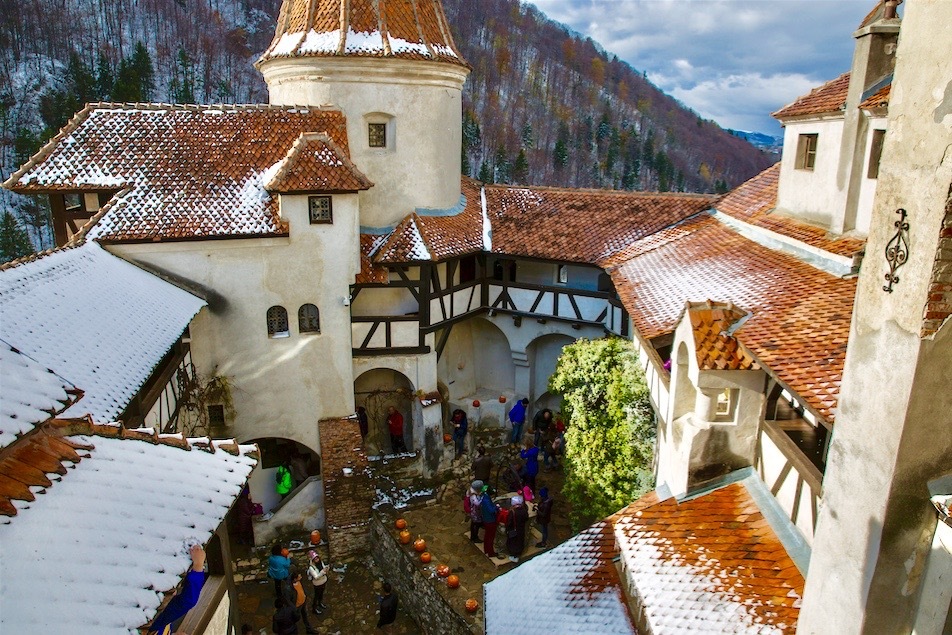 (G Adventures' Halloween Tour of Translyvania and Dracula's Halloween Party in Transylvania)
The castle is the country's first private museum, displaying the historic furniture, weapons and armor collections of its last inhabitant, Queen Marie of Romania. It towers over the picturesque historic village of Bran. And it's part of a region with other medieval castles, towns and fortresses, winter ski hills, and some of Europe's richest forests with rare wildlife.

How To Get There?

You can travel to Transylvania pre- or post- Danube river cruises sailing out of Bucharest, or as a dedicated tour, cycling, or hiking trip. There are even special Halloween tours to pay homage to 'Dracula's Castle' and celebrate the haunted holiday inside its walls.

Visit This: Underwater Winery in Croatia

Where's the Best Place to be on National Cake Day?

Top 10 Reasons to Travel to Croatia

Three European River Cruises You May Never Have Heard Of